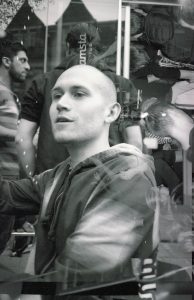 Sevish is a musician from London (UK) who produces various styles of electronic music like jungle drum & bass, house, breaks, techno and ambient. His use of alternative tunings — microtonality & xenharmony — give his music a uniquely warped sound. It is approachable and funky music that appeals to the body as much as its abstract concepts appeal to the brain.

“[Sevish]’s tunings are artificial—they don’t necessarily correspond to the way sounds vibrate in nature—but that’s their appeal. Instead of consonance or impeccable intonation, his songs feature sounds that vibrate against each other in unusual ways. It’s unnerving at first listen, but—similar to ultra-spicy hot peppers or extreme fitness—strangely addictive.”
–Bandcamp Daily

“Sevish holds in one hand a mastery and interest in utilising these strange tunings, and in the other a deft ability to ingratiate them into popular and agreeable styles. The music Sevish presents is as slick as any project using standard tunings and scales, but here we find a unique sheen to everything as the inventive tones augment the tracks and engage the listener.
–listencorp #001

“The artist that I think that everybody should check out if you’re into microtonal stuff, or at least want to start maybe dabbling in it without going to far off the deep end, is a producer by the name of Sevish. [His music has] the grooves, sounds and timbres of electronic music but now you also have this added layer of weird microtonalness. Really cool stuff.”
–Adam Neely

Since around 2009, Sevish’s craft has included the use of microtonality & xenharmony. Still something of a dark art — though MIDI 2.0 might encourage masses of people to follow this path in coming years — alternative tunings allow for new musical ideas and moods by expanding the pitch palette. Microtonality refers to musical intervals that are smaller than the semitone. Xenharmonic describes music that sounds remarkably different from standard Western tuning. The results can feel alien, familiar or somewhere in-between. They can sound out-of-tune, perfectly-in-tune, or somewhere in-between. A multitude of other impressions are possible. Sevish uses tuning as if it were simply another variable in the music that can be tweaked, rather than taken for granted.

While microtones are not really new — the earliest music would not have conformed to the modern standard of Western tuning — microtones are indeed new in the experiences of many people today. Even outside the West, where traditional music is microtonal, Sevish’s exploration of xenharmony still bends the ear in a fresh way. And by blending this with electronic music, Sevish avoids his work becoming too abstract or academic, but still appealing to the body.

The microtonal or Xenharmonic thing is one of the new frontiers for experrymental musicians. If you think i’m nuts just listen to Golden Hour. Sevish will wash out your ears and give you some completely new musical thrills.
–Dubbhism


The approach that Sevish has on xen music is special, and you will most probably be able to grasp the harmonies and melodies of the tuning systems. You’ll get it.
–Can this even be called Music

Sevish prefers to release new music in the form of albums. As of 2021, his solo albums include Formless Shadows, Bubble, Horixens, Harmony Hacker, Rhythm and Xen, Golden Hour, and Sean but not Heard (as Sean Archibald). These can be grabbed on Bandcamp, or streamed on YouTube, Spotify etc.

Sevish has built a following on YouTube, where his tracks ‘Gleam’, ‘Droplet’, ‘Desert Island Rain’ and ‘Ganymede’ have been widely watched.

In 2010, Sevish’s music was included in various performances of the 60×60 project. 60×60 brings together 60 works from 60 composers, each a minute long. Submitting under the name Sean Archibald, his work See Now was used in the 2010 International Mix, Crimson Mix and Untwelve mix. It was also performed in the 60×60 Dance Mix @ Stratford Circus, where is was combined with salsa dancing from SALSAMOVES, and choreographed by Paul Harris (“the World’s only wand combat choreographer” who worked on Harry Potter and the Order of the Phoenix).