Of all the software synths in the world, very few of them support microtonal scales. If you are a musician using Linux and open source software then your options are even fewer. It’s for that reason that I want to celebrate the news that amsynth 1.8.0 adds support for microtonal tunings! 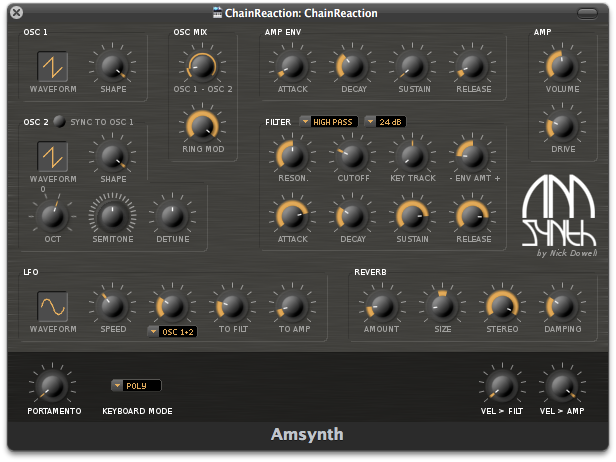 amsynth is a virtual analog synthesizer that runs as a standalone or VST, LV2 or DSSI plugin. Its sonic characteristic is similar to other popular digital VA instruments – fantastic for leads, basses and stabby chords. It’s light on the DSP and the controls are very easy to understand, so amsynth will rightfully earn a place in my toolkit once I move my music production machine over to Linux.

The easiest way to get amsynth if you’re on a Debian-based distro is to add the KXStudio repositories and then install via apt. Assuming you already have the KXStudio repos on your system, simply run the following command:

If you’re unable to use the above, download the source for amsynth 1.8.0 and build it.

Once you have amsynth up and running, microtunings can be loaded by right clicking the interface and selecting a .scl file. In addition, you can load up a .kbm file for custom key mappings.

If you need some Scala tuning files (.scl) to play with, generate some with my Scale Workshop browser tool, or install Scala itself. Scala is extremely powerful, though you need to install it to your PC along with all its dependencies.

Developers, TAKE NOTE of what amsynth developer Nick Dowell has achieved here – .scl and .kbm formats are BOTH supported. .scl files specify the intervals in the scale, and .kbm specify the base tuning of the scale, whether it is A = 440 Hz or something else entirely.

Without supporting both of these formats, a synth could barely be said to support microtonal scales at all. I’m so pleased that amsynth gets this right.

Judging by this page on amsynth’s GitHub, it looks like amsynth may become cross-platform in the future. Should this ever happen, then Windows and Mac users would also have access to this nifty, free and microtonal instrument too. I look forward to this and will follow amsynth’s progress into the future.