Inharmonic Strings and the Hyperpiano

We can actually plot out a graph which shows the interval between two strings and the corresponding dissonance. This is called a dissonance curve, and for a normal string it looks something like this: 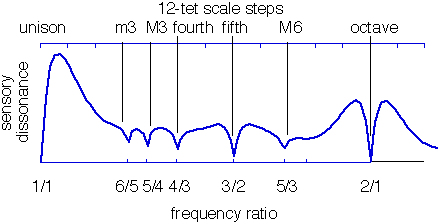 Today, such a string is more than just a mathematical curiosity. It exists in the physical world.

“Inharmonic Strings and the Hyperpiano” (by Kevin Hobby and William Sethares) is a paper published in Applied Acoustics. The strings in their hyperpiano have a stretched out dissonance curve where the double-octave sounds most consonant and the octave becomes dissonant. Okay so maybe it’s not going to be used on every new pop record, but this kind of freaky instrument can produce game-changing new tonalities.

Since the dissonance curve is stretched out to the double-octave or “hyperoctave”, Kevin Hobby suggests we might try tuning a hyperpiano instrument to 12 equal divisions of the hyperoctave. Wait, isn’t that just 6-EDO – a whole tone scale? Actually, it isn’t! They may be identical tunings, but the octave is considered a dissonant interval on the hyperpiano, analogous to the tritone on a normal piano. So it makes a lot more sense to describe this tuning as 12 equal divisions of the hyperoctave. Really.

The ringing of the strange hyperpiano sounds like a death bell for the unwavering cult-like belief in pure ratios and true frequencies. Tuning and timbre are deeply linked. If we’re willing to experiment with new timbres then we can uncover new musical vocabulary for the future to come.

The next step is to explore all this for yourself – download the sampled hyperpiano and give it a play.