Mapping microtonal scales to a MIDI keyboard in Scala

I recently wrote a tutorial about how to change the root note of your microtonal scale, where I used Scala’s Edit Mapping dialog. There is so much more I want to say about keyboard mappings. This time I’m explaining how to map various microtonal tunings on to a standard MIDI keyboard in a sensible way.

Needless to say, this topic is important for musicians who want to use microtonal tunings on their standard MIDI keyboard controller. I’ll be using Scala for this tutorial.

First, an explainer on “scale degrees”

This is the easy bit but still a powerful idea. Scale degrees are numbers that describe the order of notes in a scale. The root note of a scale is always scale degree 0, and the degree numbers increase as you go up the scale. For a 7 note scale, the scale starts on degree 0, then passes through 1-6. When we reach 7, we’re an octave up from where we started. In this case, 7 would be called the octave degree.

12-equal could also be described with scale degrees. Let’s take C to be our root note, so C = 0. The rest is as follows:

When we’re working with large scales, notating by scale degree becomes an efficient way of describing what notes we want to play. We will also use scale degrees to tell Scala how to map notes to a keyboard.

How to map a 7-note tuning to the white keys

Imagine we have an excellent microtonal 7-note scale, such as 7-EDO, mavila[7], or something else. By default, your synth maps these notes linearly and chromatically across your MIDI keyboard. Press the C key, and at the same time press the key which is 7 steps above it (that’s a G). You will hear an octave! That’s incredibly jarring, because we expect to hear an octave from C to C, not from C to G.

Linear mapping of a 7-note scale on to chromatic keys:

The scale degrees in red will be heard as octaves. Not fifths!

Custom mappings help to make a regular pattern that is much more familiar and easy to navigate:

Start off by loading a 7 note scale into Scala. I simply typed ‘equal 7’ to get 7-EDO.

The mapping should repeat every 12 notes on our keyboard, so set Size to 12. Remember that’s 7 notes from our scale, plus 5 black notes we’ll skip out, totalling 12.

Set a value for Formal octave degree, which is 7 in this case.

Fill out the remaining fields as shown below: 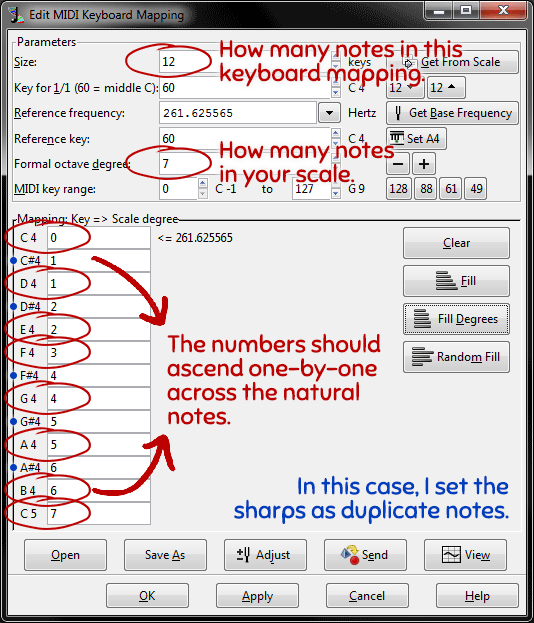 If you don’t see the fields at the bottom, make sure you enter a value for Size. Scala will then create the empty fields for you automatically, and you can type in the scale degrees that you want for your mapping.

Note that we’re skipping the sharps/blacks, so you can leave those fields blank. Or more recommended is to enter duplicate notes so you can still play the black keys to get a pentatonic subset from the scale.

While you have a scale and a mapping loaded at the same time, now is a good time to export your tuning for softsynths, or relay it to hardware synths. It feels much easier to play with the new mapping.

How to map a 12-note subset of a larger tuning

Now imagine that we have a tuning much larger than 12 notes, and we want to select just the notes that we want to map on the keyboard. For example 31-EDO which is a meantone temperament (among other things) so it has a nice 12-note meantone scale.

Here is how 31-EDO would be linearly mapped to a keyboard:

The 12 notes selected above give a chromatic scale that sounds more in-tune than 12 equal, but only in some keys while other keys can sound worse. Take some time to experiment with it and listen.

Go to Edit > Clear Mapping to reset your mapping back to normal, then go to Edit > Edit Mapping to open the keyboard mapping dialog. Fill in the Size (12) and Formal octave degree (31) then enter the scale degree for each note of the mapping. 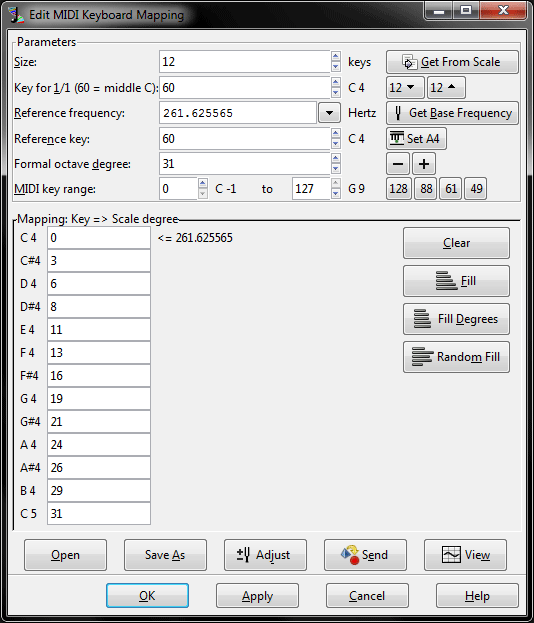 As before, now is a good time to save your .kbm mapping file, and load it up on a synth of your choice.

Instead of using Scala’s keyboard mapping functions, we could do it with the mode command instead. The mode command lets you choose a subset of notes from your currently loaded scale, and then it deletes the remaining notes.

The end result would be a single .scl file with the extra notes removed, instead of the usual .scl and .kbm pair (containing the full gamut of notes plus tuning information). You might use this method if your synth supports .scl files but not .kbm files.

Imagine that we want to recreate the above quasi-12-equal mode from 31-EDO. Just type these commands into Scala:

You’ll get the following output from Scala:

More things you can try