How to invent your own musical scales using Scala

[Update Jan 2023: This article is quite old now. If you’re looking for something more user-friendly than Scala, try Scale Workshop. If you want to learn more about Scala, read on!]

When you want to edit photos, there’s Photoshop. When you want to listen to music there’s iTunes (if you’re a pro at life, there’s foobar2000). When you want to create your own musical scales, opening up endless possibility in harmonic and melodic expression, there is Scala. Scala is a multi-purpose toolkit for everything related to tunings, scales and microtonality. You have a hardware synth that you want to retune? Scala will do it. Or a softsynth? Scala can export the tuning files required to make that happen. Want to generate all kinds of crazy scales that you can use to compose new music? Scala has near infinite options for you to play with. Want to experiment with world music and historical scales? There’s a database of thousands on the Scala website. 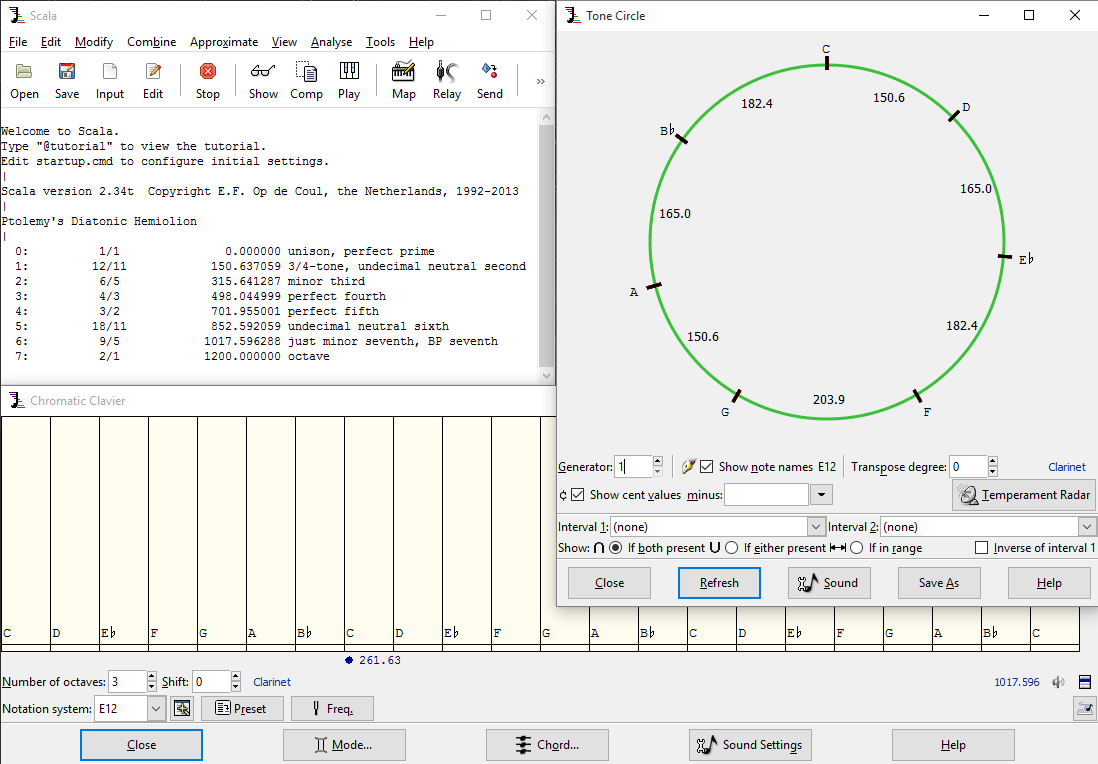 This is a beginner-level tutorial which deals with scale creation and microtonality in a practical way. I can’t attempt to cover everything Scala can do here. But you’ll learn some fundamentals.First I’ll show you how to create equal scales, then I’ll show you how to create just scales. If you don’t know what the difference is, just follow the tutorial from beginning to end, and read some of the links later to fill in the gaps of your knowledge. By the end of this tutorial you will have invented some of your own musical scales!

Equal temperaments are scales that divide an octave into some number of equally big pieces. The 12 note scale of Western music is an example, as each semitone is of equal size. So you already have experience with equal temperament scales and didn’t know it.In Scala, equal temperaments are trivially easy to create!A popular thing that beginning microtonalists like to do is to try quarter tones. The quarter tone scale divides the octave into 24 notes. Let’s make the scale in Scala. Load up Scala, type this line into the text field at the bottom, then hit enter:

Explanation: When you type the command equal, followed by a number, Scala will produce an equal-tempered scale with that number of notes in an octave.But it looks like nothing happened after we hit enter. We still need to check that the scale was created correctly. So type:

This will show you the tuning data for the equal temperament scale you just created. As below:

Explanation: The equal command that we just used has produced 24 items for us (24 notes in our scale). The  show command lets us see those 24. Each of these shows some number of “cents.” The cent is a measurement of how wide or narrow an interval is. Notice that each interval in our 24-equal scale goes up by 50 cents. 50 cents is exactly one quarter tone. 100 cents makes up a semitone, and 1200 the whole octave. Cents are a useful measurement to get your head around if you want to compare tunings with each other.That’s enough staring at numbers. Time to hear these quarter tones for the first time. On the Scala interface you’ll see a button which says play. Click that button!

Here’s the “chromatic clavier!” You can use this to try out your scale using your PC’s built in MIDI synth. A very handy tool indeed. Play using your mouse, or use the Sound Settings button to set up a MIDI keyboard controller.

In the first part, we divided an octave into some number of equal parts. Amazingly, we are not limited to dividing octaves. We can choose to divide other intervals instead, such as a perfect fifth or whatever you like. But what’s the point?Every note in a non-octave scale has a unique identity. Consider that we know a note A as a note oscillating at 440 Hz, or some octave above (880 Hz, 1760 Hz) or below (220 Hz, 110 Hz, 55 Hz). If our scale doesn’t include octaves, then a note A won’t have any other counterparts higher or lower in the scale. This means that, as we climb up or down into different registers, we keep hitting unique note identities which haven’t been heard elsewhere in the scale!This approach is extremely fruitful for new sounds, sonorities and progressions. However composition technique must change drastically. For starters, there are no more chord inversions, since you can’t raise any notes up or down an octave. Of course, this makes voicing difficult too. But you gain a very wide variety of intervals to play with, and it will challenge and grow you as a composer to exploit non-octave scales. Just try it and see.Here’s how we do it. We’re going to create a scale which divides a perfect twelfth (an octave plus a fifth) into 13 equally spaced parts.

Explanation: The equal command tells Scala that we’ll be making a scale where all notes are the same size. The number 13 shows that we want 13 notes. And that weird fraction on the end? That’s the big interval that will be split into 13 equal parts. Think of it as a pseudo-octave.Why 3/1? For now just take my word for it. 3/1 is a perfect twelfth. So rather than repeating at the 8th (octave), we’re repeating at the twelfth.Notice, if we don’t include the number 3/1, then Scala will assume that this is an octave based scale. (An octave, by the way, can be expressed as 2/1).Let’s see the cents values for the scale we created:

Can you remember how many cents are in an octave?The answer is 1200 cents. Looking at the above list of intervals, we can see there’s no value too close to 1200 cents at all. But there’s this nasty 1170 cents interval that’s gonna sound noticeably flatter than an octave. On the other hand, that perfect twelfth at 1901.955 cents, is purely in tune. Whatever this scale is, it doesn’t represent anything we’re used to in Western music. There’s no perfect fifth, no octave…The scale we’ve just created is none other than the Bohlen-Pierce scale, a famous non-octave scale with many interesting properties. It sounds very alien until you have taken time to immerse yourself in it. Jam with the chromatic clavier and hear it for yourself (remember, just click the play button on the Scala interface to do this).

The topic of just intonation (JI) is deserving of several books in its own right. It is an old mathemusical theory in which many cultures have their own take.What could a name like “just intonation” mean… If you think of “just” as meaning fair, right, exact, and perfect – and intonation of course having to do with the accuracy and flavour of the pitch – then you should get the general idea. Just intonation is a tuning system that uses exact, perfect intervals.In fact, the pitches of just intonation are made up of ratios. Think of numbers such as 2/1, 3/2, or 15/8. (These intervals are an octave, perfect fifth and major seventh, respectively).

Time to get creative! There are many ways to go about making your own just scale, but here’s one way that can get you exploring quickly.On the main Scala window, click on the Input button to open up the Input Current Scale window. Here you can enter the pitches you want to use. In this case we’ll enter some fractions at random, following some simple guidelines.

Below are a few examples that follow the above guidelines. 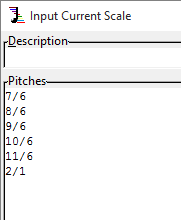 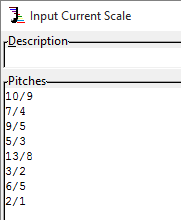 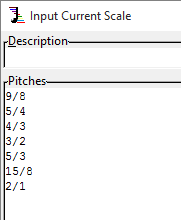 You can also use Kyle Gann’s anatomy of an octave to find some interesting numbers to plug in.Once you’re done, hit OK and you’ll be taken back to the main Scala window. At this point you will find 9 times out of 10 that Scala says “Scale is not monotonic ascending.” If you saw this message then it means that the pitches of your scale are in a weird order. To fix this issue, tap the Edit button on the main Scala window, tap the Ascending button, and finally click OK.Let’s take a quick look at what you made:

Take a quick look at the interesting names that Scala gives to the ratios you randomly chose.Now it’s time to hear your scale! Hit the Play button to show the Chromatic Clavier. You can hold shift when you click to hold multiple notes down and hear that solid JI sound.Alternatively you can play your scale using a connected MIDI controller or MIDI keyboard. To do this just click the Relay button on Scala’s main window and then click the Start Relaying button.Repeat this process of JI scale creation a few times, each time playing your scale using a keyboard to get a feel for the unique musicality of each one.Once you become comfortable with this process and you get to know certain ratios that you love the sound of then you can start to ignore the guidelines I gave before.

Now you know how to come up with a just intonation scale of your own. But you still might not know why you would want to use just intonation. There are many differing opinions out there and it’s easy to find them using Google. And I recommend you spend a lazy afternoon doing just that. Here are a few suggestions: